The site is long and narrow consisting of three groups of railway sheds that have been converted in to Warehouses producing a harsh RF environment. The warehouse layouts varied from some being block stacked pallets with others being racked. Some of the sheds are also further subdivided into smaller units at the front of the buildings.

Established in 1954, Massey Wilcox Transporting LTD is a family owned business located between Bristol and Bath. Operating as a handling warehouse and distribution site, Massey Wilcox use warehouses on an Industrial Estate to provide third party companies with warehousing stock control services. The company wanted to enhance their stock control processing which would require the use of bar code scanners within the warehouses.

It had been identified that there would be significant efficiencies in both time and manpower with the implementation of a new WLAN network.

The site is long and narrow consisting of three groups of railway sheds that have been converted in to Warehouses producing a harsh RF environment. The warehouse layouts varied from some being block stacked pallets with others being racked. Some of the sheds are also further subdivided into smaller units at the front of the buildings.

DigitalAir were contacted to install a new network in the converted Railway Sheds/Warehouse’s, with a requirement to share out the data connection from an office close by, which also needed a wireless infrastructure installing.

DigitalAir started by conducting a full site survey for both internal and external wireless access points as well as a line of sight survey for connectivity between sheds and the main office. During this site survey, the engineers conducted an RF survey, scoped mounting locations for access points and wireless bridges, plotted potential cable runs, as well as mapped out suitable locations for networking switches for a complete end to end solution.

Initially I thought that the time allowed for the survey was excessive but soon realised as I shadowed the engineer how exhaustive it had to be to ensure every part of the site had good workable coverage.

In a two week installation, DigitalAir ran new cables to each access point location, installed and conjured new network switches in new IP rated protective network cabinets, installed access points to roof level beams as well as external beams. The wireless bridges were mounted using galvanised steel and bracketry to the existing beams on canopy roofs. Scissor lifts and cherry pickers were used both internally and externally while the warehouse was still in use to ensure as little down time for the business as possible.

"The installation team were very professional with very little impact on our day to day operations. Since going live I have been very impressed with the coverage of the network and the speed over the wireless bridges. The solution employed by DigitalAir using the Rukus AP has given us significant deployment savings and a network that far surpasses the traditional wireless warehouse systems." 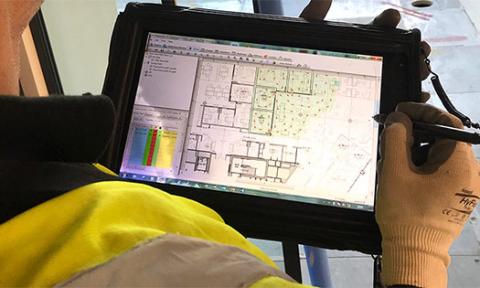 Creating the perfect WiFi design that meets the demands of today's mobile workforce takes years of experience. This is why our consultative "WiFi Design Workshops" produce the best WiFi design for each specific customer.
Blog

How to design outdoor WLAN on a budget

For certain sectors of the market, in a particular caravan and holiday parks cash is king and therefore when it comes to deploying wireless they are looking for a cost effective solution.