Signal fading is a common issue for links installed over large expanses of water, or with a very high rain probability. If a reflected signal arrives at the receiving radio delayed, it will cause disturbance in the signal; normally with an enhanced or fading strength. This can be caused by the RF effectively reflecting off the surface of the sea, delaying its journey to the other end of the link.

Due to the tidal fading effect those links constantly have the effect of signal decrease and increase during recurrent time periods. These events, which were defined as having fades relative to free space powers in excess of 20 dB for durations of 2 hours or more, are believed to be generally due to extreme sub refractive conditions (when the atmosphere deviates from the standard refractive conditions, the RF reacts to that change).

Analysis of synoptic weather conditions and nearby rawinsonde data by authors during four sustained deep fading periods showed atmospheric conditions consistent with extreme subrefraction. The term "rawinsonde" is often used to describe radiosonde systems that measure winds, along with pressure, temperature and humidity. Based on this data, Ligowave introduced a tidal fading effect based mechanism derived from the research with the results shown in the below image.

The first prototype of mitigate tidal fading effect mechanism was implemented starting from x.95 firmware, which helps to keep constant signal strength over sustained periods of time by using slow frequency hopping approach. The frequency which is used by algorithm is left for the user to choose. The only requirement is to choose at least 2 frequencies preferably with not less than 100 MHz gap between each. The signal level threshold must be selected based on the current link conditions. 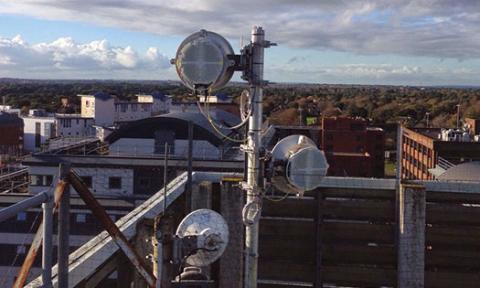 Industry-leading wireless Point-to-Point connectivity solutions AirBeam, AirLink and AirLine delivers up to 20 Gbps throughput for the most demanding of applications.
Blog

What Is a Wireless Bridge?

I thought I would use my latest blog to get back to basics on the subject of wireless bridges as there are often a lot of misconceptions about exactly what they are and how they work. Please note some of the above licensing information may not apply outside of the UK.
Blog

Planning a Point to Point Bridge

I have been dropped into the sub-world of Wireless Bridging so I thought in an effort to enlighten others into what is required when planning a Point to Point wireless bridge I would document what I’ve picked up in this blog.