Nowadays, your mobile phone isn't just a gadget used for communication, it has become a tool that any professional can't do without. With the app markets constantly increasing and improving their offerings, some of the most impressive pieces of software are being developed, and they’re literally at out fingertips, often for free!

I wanted to share a few of those that Im particularly impressed by; some 'tools of the trade'. Don't worry, I've left off 'Flappy Bird' and 'Candy Crush'!

inSSIDer considers each of the following factors to rate which channel is the best for your wireless network.

It might not revolutionise the world of WiFi, but its definitely a handy tool to have in your pocket!

ZD Remote Control is available for free on the Apple App Store, with Android versions planned for 2014. Ruckus plans to add capabilities to future versions of ZD Remote Control, like the ability to generate Guest Passes and push them out to customers via either email or SMS, plus the ability to view the Spectrum for a 2.4 or 5 GHz radio on any Ruckus ZoneFlex AP.

How often have you wondered whether your network is performing as it should? The Ruckus Speedflex is a testing tool, based on the open source performance test tool, SpeedFlex. It allows you connect to a SpeedFlex server, such as a Ruckus ZoneFlex Access Point or ZoneDirector, and capture real time throughput, packet loss, and site data. The data can then be sent in an email in PDF format, detailing where the test was conducted, and deliver that to the relevant party.

So with the App markets becoming increasingly competitive, and our mobile devices being more capable, the sky really is the limit. It's definitely a case of 'watch this space'! 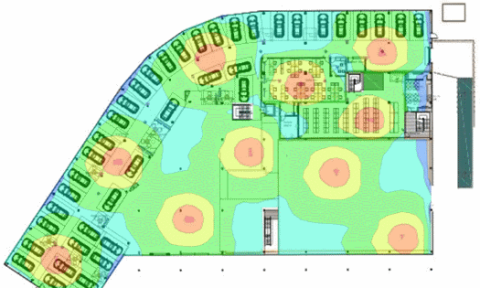 Here at DigitalAir it must be said that we love our wireless surveys. Due to the fact that we perform WLAN Surveys for various Cisco Gold partners and some large system integrators, we think that we are not too bad at them.
Blog

The importance of a Wireless LAN survey

With our experience in performing installations of wireless LAN networks, a survey is the most crucial stage of the implementation.